Boxer dogs are great all around dog breeds, distinguished canine and the coolest, most lovable dog out there! Boxer Dogs are medium-built and strong breed that are so named because of its habit of standing on the hind legs to begin a fight and boxing with the front paws. 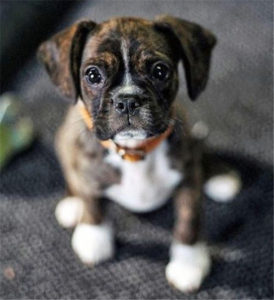 By nature, Boxer dogs are working dogs. Throughout history it has been trained as:

The American Kennel Club (AKC) categorizes dogs into 7 groups of herding, hound, non-sporting, sporting, terrier, toy and working. And the largest breed registered in the working dog category is the Boxer.

No doubt the Boxer Dogs make for great utility dog but the greatest advantage to owning one is that Boxer Dogs can be your most outstanding companion on four legs and great source of personal fulfillment.

By the way, the AKC registered over 150 different breeds totaling nearly one million dogs in 2003. To put that in perspective, the animal shelters in America rescue up to 12 million homeless dogs and cats every year and 25% of these are purebreds.

Devoted and glad owners of Boxer Dogs have come up with a long list of attributes and traits of their favorite pet that include:

The Boxer Dog’s history could be traced back to feudal Germany, where it was a small hunting dog that could tenaciously hold onto a bull, boar, or bear till the master arrived. It was also a utility dog for peasants and shop owners, and even a performing dog in circus.

The Boxer Dogs as we know it today is a bigger breed – a mixture of the German Boxer with a taller, more elegant English import. The era of this modern Boxer began in the 1880s and became really popular in the United States in the late 1930s-1940s. 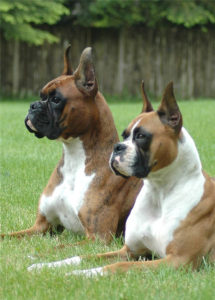 Handsome dog: Within the canine world, Boxer Dogs are medium-sized dog standing at 21 to 25 inches at the shoulder for a full-grown female, and weighs some 50 to 65 pounds. The male can be taller and 15 pounds heavier.

It has a striking good look with chiseled head, square jaw and muscled body that make for a very handsome silhouette.

The ears are cropped and erect that enhance its hearing – the Boxer most developed sense. It is always alert and vigilant, an instinctive guard dog.

The shortened muzzle makes hot and humid weather uncomfortable for the Boxer Dogs.

The coat is short, hard and smooth, and possesses a natural sheen that can be enhanced with rubdowns with a chamois cloth (especially after a bath).

The short coat cannot protect him well from extreme elements of the weather and thus Boxer Dogs should definitely not be kept outdoors. It is a housedog, sensitive to temperature extremes, does not enjoy the draft, summer heat or cold.

Boxer Dogs come in attractive basic colors of fawn and brindle. The fawn varies from a tawny tan to an especially beautiful stag red. The brindle (clearly defined black stripes on a fawn background) can be sparse, in between or dense.

A beauty standard for Boxer Dogs is that their white markings or “flash” should add to their look and may not cover more than one-third of the entire body. Some predominantly or all-white puppies (known as “check”) may be born in a litter.

In the US, however, the American Boxer Club members are pledged not to register, sell or use these “whites” for breeding so as to retain the beauty of the true fawn and brindle colors in the breed. 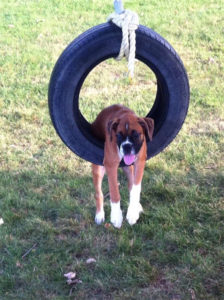 Personality-wise, Boxer is a cool dog that will not bark without cause. Its expressive face – the furrowed forehead and dark, soulful eyes – is a charming quality that sets the Boxer apart from other breeds.

It can mimic the moods of its master and adopting one could bring you 9 to 11 years of joyful companionship. In exceptional cases the Boxer can live up to 15 years.

Pet Boxer Dogs although low-maintenance, require your consistent attention, exercise, human interaction, consistent obedience training and lots of love. You cannot leave them to their own design for too long or they get lonely, bored and into trouble.

Being a big and strong dog as well as a highly intelligent one, Boxer Dogs need both physical and mental stimulations to keep them even-tempered and dignified while still keeping their impish spirit and fearless courage in tact.